The Perrysburg Township Fire Department is charged with providing fire and rescue operations throughout the Township. Through mutual aid agreements, the department also provides protection on an as-needed basis to other municipalities throughout Wood County. The full-time firefighters are represented by International Association of Fire Fighters Local 4170.  For a brief history of the PTFD & EMS Departments click here. 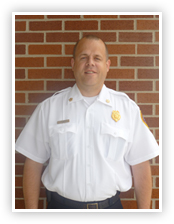 Chief Brice has been a member of the department since 1993.  At that time he joined the volunteer ranks of the Perrysburg Township Fire Department.  Subsequently he was hired as a part-time employee and eventually hired full time in 1996.  He earned his Bachelor of Science in Biology from Bowling Green State University in 1995.  He has been a paramedic for nineteen years and active in EMS education.  In January of 2004 he was promoted to Deputy Chief.  Upon Chief Dimick’s retirement in March 2011 he was promoted to Fire Chief.  He is also an active member of the Wood County Local Emergency Planning Commission, the Wood County Pandemic Influenza Planning Committee, the Wood County Fire Chiefs Hazardous Materials subcommittee, and he sits on various advisory boards for Owens Community College, Penta Career Center, and St. Luke’s Hospital.

Deputy Chief Rodriguez is a graduate of St. John’s High School and continues to be a “man for others”.  He and his wife, Barb, moved to Perrysburg Township in 1995 and started their family.  At that time he joined the volunteer ranks of the Perrysburg Township Fire Department and in 1997 he was hired as a full time Firefighter/EMT. He received the Black Swamp Humanitarian, Beyond the Call of Duty Award in 2003 and was Fire Fighter of the Year in 2004.  In 2006, Jim was promoted to the Captain position.  He has several certifications such as Firefighter II / Paramedic / Fire Safety Inspector / Haz-Mat Technician / BLS Instructor / CE Instructor and has taken several Officer Development courses.  In April of 2013 he was promoted to the Deputy Fire Chief position.   Since then he was assigned to implementing the new CAD (computer-aided dispatch) and RMS (records management system). As Deputy Chief, he assists Chief Brice in overseeing fire department operations.

Deputy Chief Rodriguez has had many accomplishments thus far, but none greater than his three daughters Shelby, Taylor, and Mackenzie.

Connect with the Perrysburg Twp Fire & EMS Dept on Facebook.